To ensure that I don’t reflect too long on the development of Brewery Pit, I thought I would also include some details of my current diorama project. 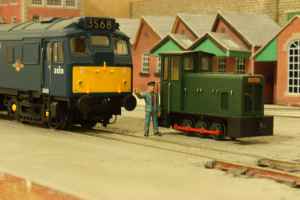 For those that are unsure, OO9 is the same scale as OO (i.e. the people are the same size), but OO9 locos run on much smaller track than OO engines. The difference is depicted in the picture to the left. Note that the man in the picture could fit easily in both engines, but the smaller engine runs on much narrower track (Narrow Gauge).

Narrow gauge railways are often constructed to: traverse terrain unsuitable for larger railways; and as a cheaper alternative to developing a standard gauge railway (such as for mines, quarries and sewage workings etc.).

As this diorama is primarily being produced so I can take photos of my locos, it is important that I can get a good perspective on the model with my camera. In a similar manner to how I produced Brewery Pit, I started by placing the main items of scenery and took trial pictures to see how well framed the final pictures would be (see right).

Based on this picture, I felt that although nicely framed, the OO9 locos would be obscured by their larger friends on the lower track. So I decided to raise the level of the narrow gauge track for the final layout.

Polystyrene rock-faces attacked with a hacksaw and being glued onto the back scene.

The rocky outcrops are constructed from polystyrene, historically not one of my favourite materials. The use of a small hacksaw on the polystyrene has given a good impression of the blasted rock-face effect I was after.

Plaster bandages were used to bed in the rocky outcrops, and also as a front facing surface for the raised narrow gauge sidings. The bandages should provide a good surface to detail with some nice upland vegetation.

I haven’t worked on this project in a while (probably because I know I have to get the jigsaw out for the next step), but now the days are getting darker and colder, I will no doubt be pressing on with construction.