In this series of articles I will introduce the locomotives that I operate on Brewery Pit.

The Prototype
One of the main engines that see’s regular use is my J70 steam tram. The J70s were introduced to replace the ageing Y6s, and were famous for running on the Wisbech and Upwell Tramway in Cambridgshire. J70s and Y6s look very similar from the outside, but are quite different underneath the tram body. The fundamental difference is that J70s have six wheels (0-6-0), while the Y6s have four wheels (0-4-0). The side skirts are also formed in a slightly different way, with the J70s including moulded foot steps (Y6s have ladder-like steps) and a curved lower section to the skirt.

The model
My model is made from a Silver Fox resin kit that was bought for my birthday in September 2006. I opened up the side windows using a knife and added hand rails. I decided that I wanted my steam tram to include a boiler, and I just happened to have a Dapol plastic pug kit lying around (many railway modellers do, for some reason). I cut up the boiler and mounted it onto a piece of plasticard and added some hand wheels to either end. The boiler isn’t accurate as it has a saddle water tank, but I didn’t really care at the time (and still don’t).

Painting
I wanted to represent an engine running between 1948 and 1950, so I purchased as many books as possible and looked at the photos of the various steam trams and settled on No. 68217, which was one of the last steam trams to run on the line.

I weathered the boiler using weather powders and sealed it with a matt varnish.

The tram was painted with a now discontinued shade of brown from Tamiya’s acrylic range (I think it was Tamiya, I can find out if anyone really needs to know).

The final weathering job shown in the pictures is not accurate to how the model now looks, as it was repainted to better fit in with my Y6 later on.

Power
You cannot obtain a 0-6-0 chassis which would fit such a small loco, so there is little choice but to install and 0-4-0 power bogie. I was a little excited at the time I bought the kit and urgently insisted a black beetle motor bogie be sent out to me ASAP. Unfortunately, the wheelbase (distance between each wheel) of the bogie was quite wide, now I know that this is a skirted loco and little of the wheels is seen, but when it is seen it looked weird.

The motor bogie was converted to DCC control and was a poor runner and it was eventually replaced with better black beetle bogie with spoked wheels (a nice touch), a shorter wheelbase and 27:1 gearing (meaning it can travel much slower than my previous 15:1 version).

My J70 is currently waiting to have a DCC ‘stay-alive’ capacitor to be installed, but more on that some other time. 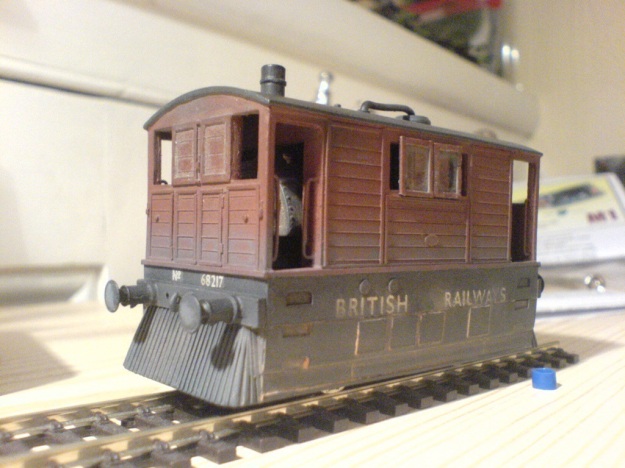 I tried to think of a good Leader pun, but ‘falling behind’ works as an inverse analogy.

The picture above shows one of my favourite locomotives: 36001, Bulleid’s Leader; the monstrous experimental steam engine that looked like a diesel. Leader was constructed in 1948 and ran for a brief 1½ year period (from 1949 to 1950). ‘Ran’, of course, might not be the best word for Leader’s trial runs, as she was prone to failure and was often towed back to Brighton Works.

Leader was fitted with various experimental design features including: a chain drive; a fully enclosed boiler; and a cab at either end. She was also fitted with an off-centre boiler (very strange). The fire box was located near the centre of the loco and must have been a terrible environment for a fireman.

I always found something fascinating about this loco and urged my parents to buy me a book on the subject. When I left home, this book was one of the first things that I ‘acquired’ from my parents house.

There is a resin kit available of Leader, made by Golden Arrow Productions, which I got for my Birthday in 2008. After purchasing a load of Bulleid Q1 wheels (expensive), I set to work planning out the look of the model. The Golden Arrow Productions mould is good, but I thought it a shame that it missed out some of the more prominent panel lines, so I stencilled the panel lines out onto the moulding and scored these onto the resin with a modelling knife.

I was also not to keen on the shape of the windows, which I felt didn’t quite capture the look of the prototype. Following the guidance of a topic on converting the Golden Arrow Leader on RMweb, I decided to widen the windows and slightly change their shape.

Leader with widened windows; much better.

The white metal chassis blocks are lovely mouldings for this model, and when built they really give you an idea of how big this engine really was (an idea of scale kindly provided by driver Bob in the pictures above and below). It might not be the best engine to build if you have a layout with low tunnel mouths, as it really is a beast. The real thing towered over most water tanks, making it difficult to top it up with water.

Livery-wise there are a surprising number of options for an engine that ran for such a short period of time. Leader carried prime grey with a large British Railways ‘cycling lion’ emblem (only on one side) for a very short period. The British Railways emblem was quickly removed and the engine was lined out (along its panels), but remained in grey.

I have never cared much for either livery and I instead opted for the livery (well… not really a livery) present in the only colour picture that exists of Leader. At this stage it was being repainted and appears to be a very silvery grey. This was the first image of Leader that caught my eye, many years ago and this was what I wanted on my model.

More about the build next time….

The picture above was taken on Salent Street just as the big freeze took hold on 4th January 1948 in Restington, Cambs.

British Railways J70 68217 is pictured on the tramway with a mixed goods train. Cars parked in the streets were an increasing problem for tramway traffic, with frozen doors and engines causing further delays for tramway freight through this long cold January.

Fireman Nick Shire was known for stopping to help stranded motorists with their frozen cars by piling scorching-hot cinders underneath car doors and bonnets to help them thaw.

The cow-catcher fitted steam trams were also used as stand-in snow ploughs, operating across main lines, private sidings and branches within the local area. Little photographic evidence of such operations is yet to come to light.