While organising my new modelling room I came across these early sketches of Brewery Pit. If I remember correctly, I got the original layout plan ideas from an issue of British Railway Modelling magazine and a feature on building a layout for £100 in Model Rail Magazine (back in 2006).

The final product is quite a close match to this early drawing . The passing loop at the rear of the model is included in the sketch along with the shed and private sidings. The main changes were that I couldn’t fit so many lines of track on the left side of the line and I instead, put two tracks into the shed.

Finding this sketch makes me think about my aims for Brewer Pit in 2014. I need to start putting some thought into how to finish off Brewery Pit, as I have given myself a 12 month deadline to make it exhibition worthy.

Below are some pictures of the first days of Brewery Pit. 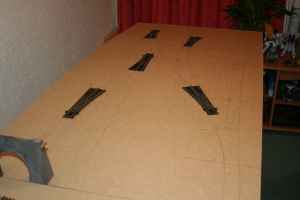 The inspiration for the model came from a 2007/2008 article on building a model railway for £100. There was also an O Gauge model railway featured in British Railway Modelling around the same period, which influenced the final track layout.

The aim was always for the layout to be urban or industrial; having visited hundreds of model exhibitions over the years, which felt like they were caked in west-country rural atmosphere, I felt the need to move away from that image.

Once I had decided on the track plan, I stencilled out the pieces of track onto my MDF frame and wired up each track section.

The straight single track on the edge of the base board is now a hidden run-through which is behind the retaining wall and underneath the housing estate. In fact, it is so hidden than no trains have run on the straight track since these pictures were taken!

I used a couple of rolls of ‘Hobby’s Instant Track Bed’ underneath the track (and also much of the MDF surface). This material was gaining positive reviews in the modelling press at the time, and although it has made some things easier to modify on the layout, it is also a bloody pain to work with. It destroys any tools it comes into contact with; caking them in the black tar-like substance, and takes half of the day to remove from your hands. I remember a number of hand strain injuries from my feeble (but ultimately successful) attempts to cut the track bed up with heavy duty kitchen scissors. You most certainly wouldn’t want to cut up a chicken breast with those scissors after I’d finished with them.

I spent many, many hours wrestling that darn tarry stuff onto the layout, and must admit that I have an aversion to going through that again. The track bed also lost some of its tackiness later in life, meaning that I had to pin all the track work down anyway.

There are also some early attempts at ballasting going on in these images (one of the perks of having a tacky track bed), which were all ultimately replaced as time went by.