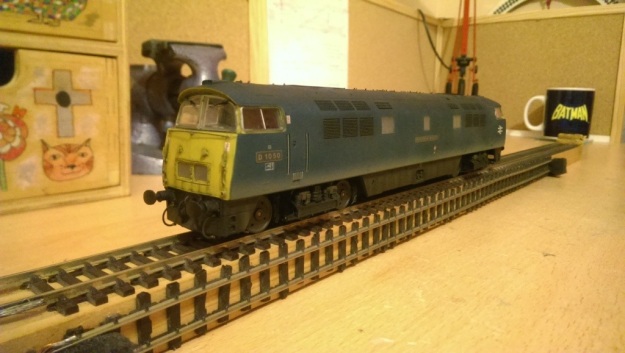 Having spent a few days tidying away the mass of modelling tools, kits, materials and instructions that I have acquired over the years, I was finally able to make use of my workbench.

Its first use in the the new house was to run-in my new Dapol Western. This is limited edition model available exclusively from Kernow Model Rail Centre. The model is professionally weathered by Mercig Studios and is the best weathering job I have seen on a ready to run loco. It sounds like this will be the last Dapol Limited Edition to be commissioned for the foreseeable future so I am quite pleased that I pre-ordered one.

Here is another shot of the workbench including half-height bookcase and shelves. My wife has allowed me to use one of her Ikea wooden mini-drawer units, which is now full of tools. My soldering iron has pride of place on top of these shelves. I have a lot of projects that were on hold over 2013, due to the impending move, so now my workbench is back in action, I can get going. Happy days. 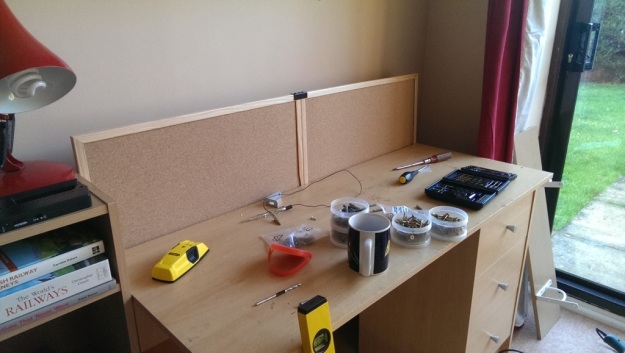 The workbench I have used for the past few years is a cheapo laminated chipboard job from Argos. The former office desk was forced into the role of being my modelling desk when we moved to Newbury in 2008. It has now taken a fair amount of abuse from my modelling torture kit, so it is only right that it continues in its role in my new house (until I accidentally cut in half or something or other).

In my new house the desk will be up against a radiator and I already suffer frequent losses of small items to the carpet monster (that darn carpet monster!!!).  I was also quite concerned that I will now loose small items down into the inside of the radiator. I decided that I would install a backing to my desk that will hopefully prevent small items from ‘pinging’ away.

I purchased x3 framed cork note boards from Staples and went about screwing them onto the back of the desk. Being lazy, I decided to screw them onto brackets and let the boards hang off the desk (as oppose to cutting the boards and mounting them on the top of the desk). There was still an annoying gap between the cork boards and the desk when they were screwed down so I tacked down some white ‘L’ shaped plastic to cover up the gap.

Now I will hopefully see a significant reduction in my time spent crawling under my desk looking for small brass bearings. The added bonus is that I can now use the cork to pin up instructions and notes, which will be very helpful.